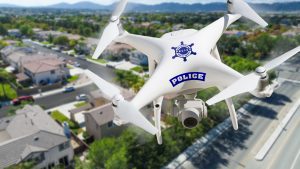 The New Year will undoubtedly see an increase in the use of surveillance drones by law enforcement. Already in use by an increasingly militarized police community, these tools have the potential for enormous positive and negative impact. As with much new technology what is positive and what is negative is a matter of perspective. And as with much of new technology, numerous companies and designs compete for the attention of the law enforcement dollar.

Positive Use by Law Enforcement

Police maintain the primary purpose of drone use is to aid in search and rescue operations; and who could argue with that? More eyes on more territory, sensors that could detect life or motion in otherwise remote areas, fractions of the costs of flying manned fixed-wing or helicopter aircraft justify use of drones by law enforcement. Force multiplication in emergency situations and life-saving potential provide strong support for drone use.

Of course, this same technology has the potential to infringe on civil liberties in ways that can only be imagined. A drone could certainly thermo-image a grow house, and a federally operated drone could certainly be used to interrupt a state sanctioned marijuana grow. Good or bad, depends on point of view. How about flying a drone over a political rally for the purpose of taking photographs of those attending, and then running those photos through off the shelf facial recognition software? Does that infringe of the Constitutional right of the people to peaceably assemble or does it enable law enforcement to identify potential terrorists and/or their potential supporters? What about the use of drones for traffic enforcement? Program the drone to note vehicles travelling at above speed limit, photograph the license plate and driver, then mail out the citation. Promoting safety on the highways, reducing injury and death, or creating a level of traffic surveillance previously unknown in the United States?

As to design, everything from wasp sized mini drones to large military Predator models present choices and opportunities for tax supported law enforcement spending. Powered by gasoline or electric batteries, some drones are fairly delicate, others can withstand rain and 25 mph winds with little loss of efficiency. Police currently use both fixed-wing and helicopter type craft and will, no doubt, continue to experiment with both technologies depending on application.

1. Police use of drones will increase in the very near future.
2. Civil liberties and public safety issues will clash head-on.
3. Courts and lawyers will spend countless hours sorting out the Constitutional issues that are sure to follow.