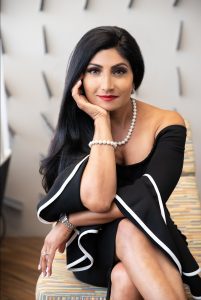 Louis Goodman 00:05
Hello and welcome to Love Thy Lawyer, where we talk to real lawyers about their lives in and out of the practice of law, how they got to be lawyers and what their experience has been. I’m Louis Goodman, the host of the show, and yes, I’m a lawyer. Nobody’s perfect!
Louis Goodman 00:26
Kelly Bagla is an award winning corporate attorney, best-selling author and host of the Go Legal Yourself podcast. She was named Top Transformational Woman Leader by Industry Wired Magazine in 2020. She routinely speaks and appears on television. She has multiple degrees and began her career as an attorney at Baker & McKenzie advising domestic and international clients on all corporate matters. Her passion is to help entrepreneurs achieve their dreams. She lives by her motto, “Grab the world by the pearls, it’s yours for the taking.” but what impresses me more than anything is that Kelly Bagla attended Cal State East Bay when it was Cal State Hayward, Harvard on the hill. Kelly Bagla, welcome to Love Thy Lawyer.

PrevPreviousStuart Hing / Louis Goodman – Transcript
NextCan I Get Pulled Over For DUI And Let Go?Next